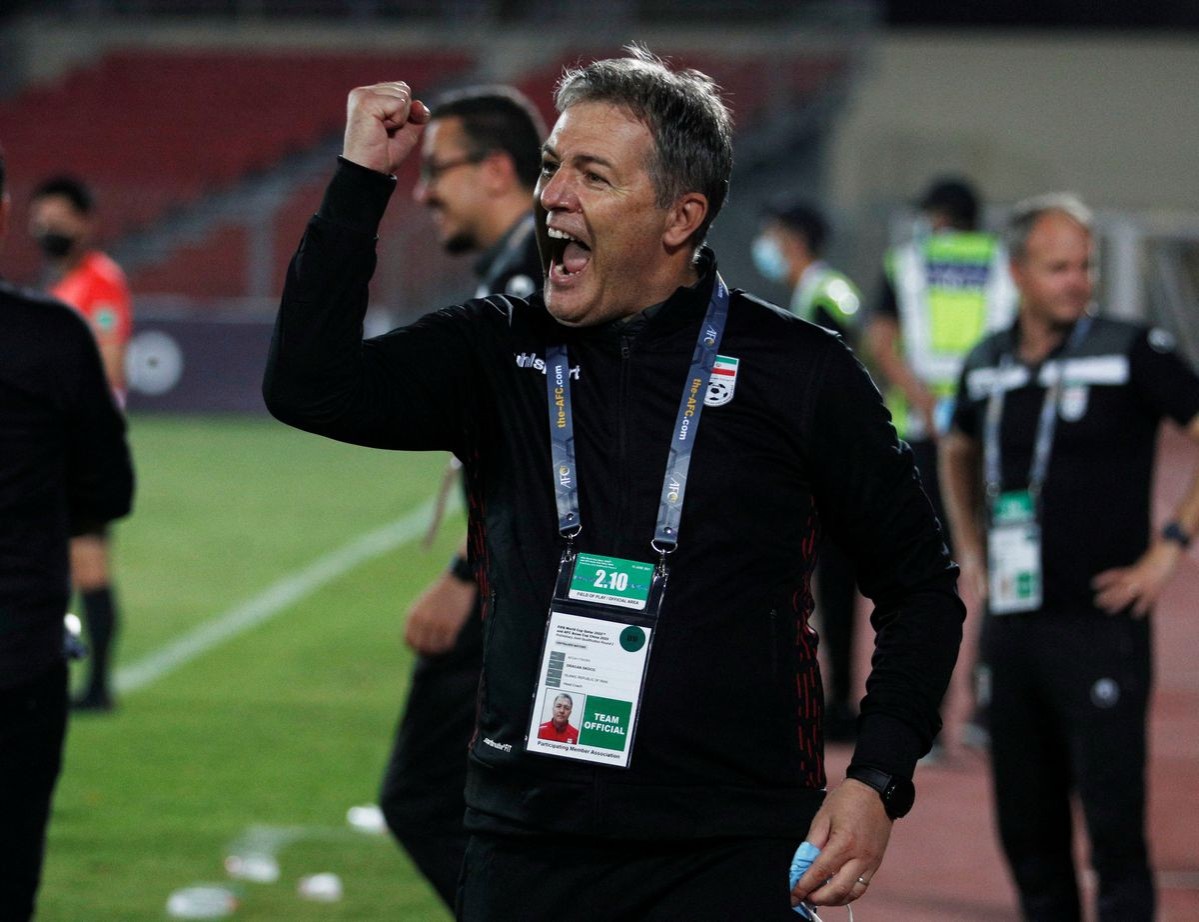 Reuters - Iran hopes history will repeat itself at this November's World Cup in Qatar, 24 years after overcoming a fractious build-up to score a memorable triumph over the United States - the country's decades-long geopolitical rival - in France.

As the teams prepare to clash again, and their governments wrangle over reviving the 2015 Iran nuclear pact, the Iranian side's preparations have been thrown into turmoil by a divided squad and manoeuvring over its leadership.

The re-election on Tuesday of former President Mehdi Taj to the top job at the Iranian football federation has heightened expectations that Dragan Skocic will lose his job at the helm of the team with less than three months remaining to the World Cup kick-off.

Ex-Real Madrid coach Carlos Queiroz, who was hired by Taj to lead Iran during their World Cup appearances in Brazil in 2014 and in Russia four years ago, is considered a strong candidate to replace Skocic, Iranian sports media have reported.

Amir Ghalenoei and Javad Nekounam, former national team players, have also been touted by those favouring an Iranian coach - especially politicians eager to see a local coach tackle the U.S. - while the squad is split between those who support Skocic and players who want him out, according to media reports.

Skocic has faced an uncertain future after he was briefly ousted last month, despite steering Iran through Asia's qualifiers to the country's sixth World Cup, losing just twice in 18 games in charge.

Skocic did not immediately reply to a request for comment, but he said in an Instagram post in July that he had withstood insults and pressure from within Iranian football to prove himself capable of qualifying the country for the World Cup finals.

The saga carries echoes of the lead-up to the World Cup in France in 1998, when the Iranians went through three coaches in the six months leading up to their highly anticipated group phase meeting with the Americans.

Brazilian Badu Vieira, who had qualified the country for the World Cup for the first time in two decades, was dispensed with soon after the draw in Marseille, to be replaced by veteran Croatian Tomislav Ivic.

But Ivic, a league title winner in Yugoslavia, France, Holland, Belgium and Portugal, was axed weeks before the team's departure for France, to be succeeded by Iranian Jalal Talebi.

Talebi, whose coaching experience included working in Singapore, the United Arab Emirates and Indonesia, lacked Ivic's gravitas or credentials, yet he still led the squad to a 2-1 win over the U.S. team that was celebrated in Tehran.

Despite that success, an Iranian side featuring Ali Daei, Khodadad Azizi and Karim Bagheri - players who remain icons both in Iran and around Asia today - and with high pre-tournament expectations exited at the end of the group stage.

"The game against the U.S. was really important because it was the first win for Iranian football at a World Cup," Mohammad Khakpour, who started for Iran in Lyon, said.

"That team had the potential to move to the second round and make more history."

Iran's current crop, led by Europe-based strike duo Mehdi Taremi and Sardar Azmoun, are also seen as capable of springing an upset in a group that also features England and Wales.

The country has never advanced to the knockout rounds in five previous World Cup appearances, but the turmoil raging behind the scenes poses a rising threat to Iran's hopes of building on a strong showing in Russia in 2018.